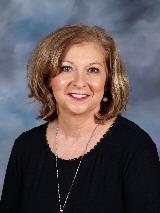 I am married to Derick Franck and we reside in Florence.   I have two sons, Derrick and Mitchell, who both graduated from MSHS.